After visiting Capri, Emilia-Romagna & San Marino, and Sicily, we’re traveling to yet another region in Italy. It’s time to take a trip to Liguria, in the northwestern part of the boot, neighbouring France. Supposedly, the name derives from the Latin word for hearth or place of baking: focus. Which seems like a probable reason to name your bread focaccia, to be honest. 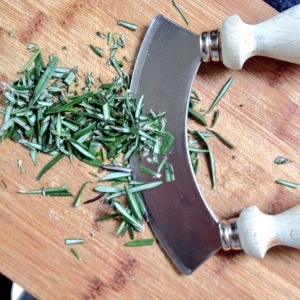 Focaccia is a wonderful Italian flatbread, with a thick yet springy texture and an infusion of herbs and oil. Most commonly used herb is rosemary, which is a perfect pair with sea salt. In this recipe, the rosemary is not only on top of the bread, but also incorporated in the dough. Yeah, I know, yum. 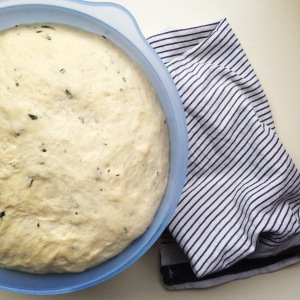 The dough of the bread is similar to that of a pizza. The big difference between the two, is the use of a leavening agent (yeast). Pizza dough requires very little, to make sure that the base stays thin. Focaccia dough however, has got to rise. For the same reason, a focaccia can soak up a lot more olive oil than a pizza, which would probably drown when treated with the same amount of oil.

Tip: Don’t let the yeast get in direct contact with salt, as this will negatively affect the rising of the dough. 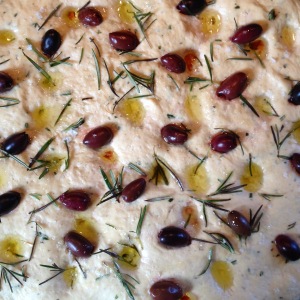 The focaccia dough can be quite dry, which is why you create holes in the bread before baking. These holes are filled up with olive oil, and seep through the bread when in the oven, which leaves you with delicious bites filled with the natural taste of the oil, the crispy sea salt, the fresh rosemary, the steel-likearoma of the olives and a lovely bread flavour. 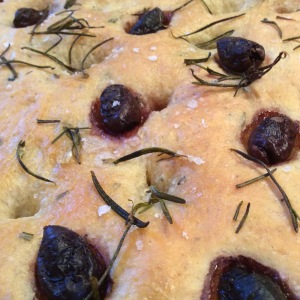 In short, just make it and you won’t be sorry. Don’t get scared off by the recipe, I assure you that it is not a difficult recipe to make, even if it is your first time baking your own bread! Like all recipes involving yeast, be patient with the dough, give it time to rest and rise. Basically, it’s a highly relaxing recipe, especially the kneading part. Let your mind drift away and enjoy the serenity. 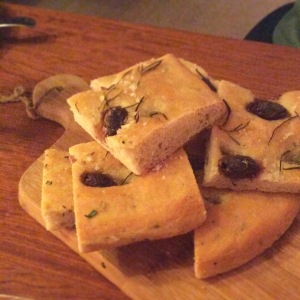 The focaccia can be served warm or cold. You can easily reheat it in the oven. Just slightly damp it with water and place in the oven on 200C (400F) for about 5 minutes.

This post is part of the A-Z Challenge, which lasts the whole month of April. For more posts on Italian Cuisine, click here.