Forget everything you know about apple pie. I mean literally everything. Cause this Bustrengo is an apple pie like you haven’t had before.

Bustrengo is a traditional Sammarinese recipe. Wait what? Sammarinese? What the hell is that? Well, my dear readers, this is the first recipe ever that I know about which originally comes from the microstate of San Marino. So yes, I cheated a teensy tiny bit, but the cuisine of the small country is highly similar to that of the Italian region Emilia-Romagna, so that’s my excuse.

And Bologna happens to be its capital, and its inhabitants happen to have been making Bustrengo for quite some time as well. Therefore, it’s a Sammarinese and Bolognese recipe (yes, the beautiful city of Bologna does indeed have more in its repertoire than the classic spaghetti sauce). The pie’s batter incorporates one of Italy’s treasured ingredients: Polenta. Combined with regular flour and breadcrums(!) the cake can be quite heavy, just like a Christmas Pudding. So take it easy on the portion sizes.

Additionally, adding in dried figs, dried sultanas, and apple makes for a kind of Autumn-like recipe. The recipe even requires you to add orange and lemon zest, which is unusal in apple pies, at least in the Dutch version.

Thus, the Bustrengo seems to disregard all that we know of apple pies. It adds its own lovely flavours to the mix, which is quite exquisite and characteristic for the region its coming from. You could spice it up even more by adding some walnuts, hazelnuts. Or get really wild and use pecans!

I would recommend to add the heavier ingredients to the dry part of the batter. This prevents them from sinking while at the same time ensuring that you will have the amazing flavour combination with each bite. Also, the batter is quite prone to create lumps, so keep stirring with a whisk until you have a smooth mixture. 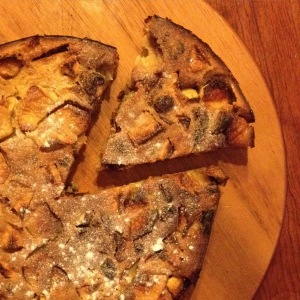 The Bustrengo is best served warm. Plain or with a dollop of cream or ice cream, and one of Italy’s great digestifs. More on a fantastic Italian liquor coming up later this month!