Where do I begin to explain my love for hummus? It’s creamy, it’s nutty, it’s spicy, it’s starchy. What is not to love?

To make this wonderful chickpea dip even better, is that you can easily make it yourself! Just grab a food processor, mix all the ingredients, and you’ll be ready to eat in just 5 minutes!

My favourite thing about hummus, is that it incorporates cumin, which is a typical Middle-Eastern spice and my all-time favourite. Whenever I smell it, I imagine standing in the middle of an Arabic souq, my senses going crazy due to all the beautiful colours I see, the various spices I smell, and the murmur of the many people I hear. 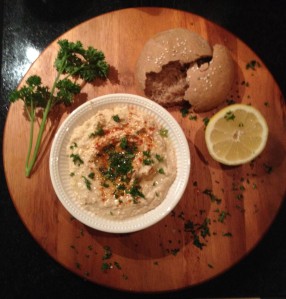 Fun fact: The first recorded recipe for hummus has been found in an Egyptian cookbook from the 13th century!

Another ingredient which is particular for Middle-Eastern cuisine, but not yet so familiar in Western kitchens, is tahini. This is a paste made from ground sesame seeds. The word tahini is derived from the verb to grind. It’s a versatile paste, most often used in other recipes. However you could actually serve tahini as a spread or dip as well!

As you might know, hummus is actually quite a healthy dish as well! Due to the chickpeas, the dip has a good amount of protein and fiber. The sesame seeds (which is the main ingredient of tahini) contain something called a methionine, which is an animo acid that us humans cannot produce ourselves, thus we have to get it via our food. Also, the sesame seeds actually complement the protein intake of the chickpeas. 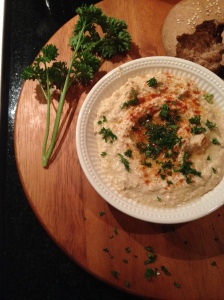 Serve the hummus with grilled pita bread, as an accompaniment to falafel or as a dip with veggies. Or why not alongside the delicious Imam Bayildi, or the Bulgursalad