Therefore, I’m introducing a new bi-weekly topic on Basil and Oil; Film Friday. A post where I’ll talk about which film I love, and why, and where I’ll definitely urge you to watch it asap.

The first food-film is a special one. One that I’ve been watching since I was a very tiny human. One that has basically shaped my view on all food-films that I would see after. My brother should already know which one I’m talking about, as it is one of his favourites.

For those who don’t, the title is…

Never heard of it? Don’t fret, that’s what I’m here for.

Almost as old as myself, this classic film tells the story of two Italian brothers in New Jersey hailing from Abruzzo, a region in Southern Italy. Set in the 1950’s the brothers are operating a restaurant called Paradise. The older brother, Primo, is a perfectionist chef who struggles with what Americans view as Italian food, and what it actually is. The younger brother, Secondo, is the restaurant manager and is charmed by the opportunities in America.

The struggles begin when, despite the delicious food made by Primo and the managerial efforts by Secondo, the restaurant is not making any profit. In the meantime, Secondo is cheating on his girlfriend with Gabriella, the wife of the competitor. The competitor’s restaurant Pascal’s is making success by being less focused on the pure Italian food, but rather on what the public is asking for: Americanized Italian food. 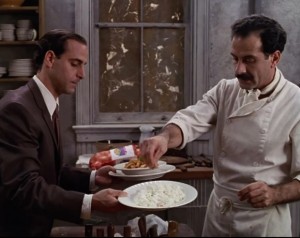 To be able to keep Paradise, Secondo asks Pascal for a loan, which he refuses to give. However he does offer the brothers a job at his own restaurant. Secondo declines as it has always been the brothers’ dream to have their own restaurant and they will not give up so easily.

Pascal decides to persuade famous Italian-American singer Louis Prima to dine at Paradise, thus giving Primo and Secondo hope for a brighter future. They put all their savings into the preparation for this important dinner, to show the people of New Jersey what real Italian food tastes like. To prepare for their big night.

What is to happen on the big night shall remain a secret, until you’ve watched the film yourself. Don’t want to give away all the spoilers already!

Fun fact: in the film the brothers are called Primo and Secondo, which is Italian for first and second. In this case, that’s the birth order of the brothers. But it’s also part of the Italian meal structure, with primo being the first course and secondo  the second (or main) course.

Big Night to me is not only a great movie because of the story, but the actors are equally as brilliant. The leading roles are played by Stanley Tucci, Tony Shalboub, Ian Holm, Isabella Rossellini, and Minnie Driver. Also, young Marc Anthony plays a small supporting role as a kitchen help.

As the film takes place in the 50’s there is still a strong sense of the American Dream. The brothers migrated from post-World War II Italy to the “promised land” or Paradise as they call it. Coming from the poor Southern Italian regions, they were sure to expect something much greater in the United States.

For Primo, this dream did not come true, as he quite often wondered whether or not he really was better off far away from his motherland. On the other hand, Secondo found America to be all that he desired. He saw the positive side of things, never gave up, and kept on going until he was able to reached what he had dreamed off. That’s the strength of this film, the differences in opinions between the two brothers perfectly illustrate what most of the immigrants in those (and present) days have felt.

Besides the insightful moral aspect, Big Night is definitely a must-see because of the stunning dishes that are being made on-screen. The risotto, the scallops, the vegetables, the frittata. And of course, the showstopper: the timpáno. See the stress that Primo and Secondo feel when making this and how the people of New Jersey respond to such magnificent food:

I must warn you though, you will get extremely annoyed at the non-appreciative, non-adventurous, non-foodie persons in this film. Primo is the epitome of frustration in this film. Luckily, there’s always the sight of food to make you happy and hungry again.

Have you seen it already? What do you think of Big Night?