At the beginning of August, I visited a city that was at the top of my travel bucket list for quite some time: Kraków, Poland. I had already heard so many positive stories about the city and my parents were overexcited after their trip to Kraków. Besides, Poland is a country I have never been too, and was curious about. The decision was easily made.

From Amsterdam it’s about a 2-hour flight, with the ticket being roughly 160 euro. At the airport it is incredibly easy to get a taxi, as there are stands from the official airport taxi company, and a ride to the city is about 110 Zloty (25 euro).

We stayed at the Hampton, which was just outside the center. However, there’s a great public transport network. Everyday, we took the tram for some sightseeing. Each trip came down to about 1.40 euro. Already we were shocked about the prices here, as in The Netherlands everything costs at least twice the amount we were paying in Kraków.

I gotta say, the Polish people know how to have a good time. The weather was great, the sun was out and everybody was eating ice cream, drinking beer on the many terraces, and overall the atmosphere was just relaxed. The city centers around the Rynek Glowny, the main square. This is the old city centre and is encircled by a green mile, consisting of romantic walkpaths under large trees, with enough benches to sit on to take in your surroundings or shelter from the sun. My favourite area of the city is most certainly Kazimierz, which was the center of the Jewish community for centuries. Although most of Kazimierz has been destroyed in the Second World War, some beautiful places and sacred buildings still stand. The Remuh Cemetery and Synagogue, dating from the 16th century, are impressive to visit. As you can see in the photos, stones have been placed on the graves as is customary in Jewish faith to show to others that this grave has been visited. 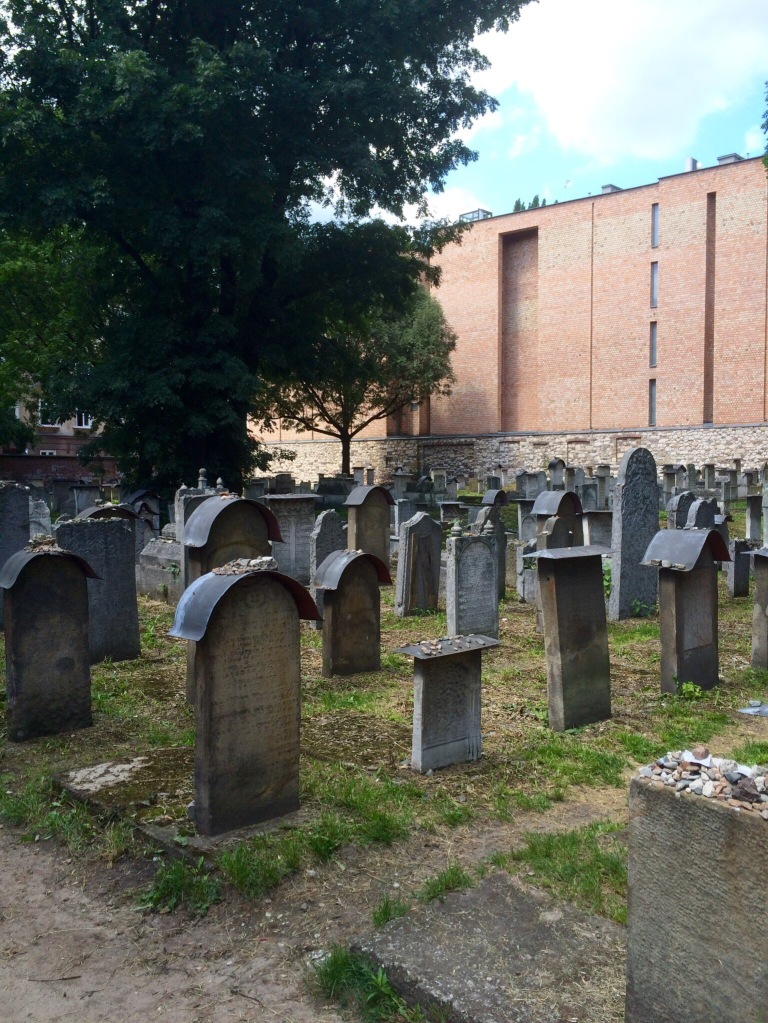 The cemetery and synagogue are located on Szeroka, a square which is also the place to be for traditional Jewish food. About 5 restaurants next to each other all serve their own specialties, are open till quite late in the weekend, and have live concerts now and then. In one of those establishments, we had classic Jewish dumplings, and toast with delicious hummus, tomato sauce, and homemade pate.

As recommended by my parents, I had made a reservation at Klezmerhois which is also located in Kazimierz. This might’ve been the best dinner I’ve ever had. Traditional Polish dishes on the menu, seated in a homey living room like area, all that while listening to a live band playing amazing klezmer. This style of music originates from the Ashkenazi Jews from Eastern Europe. Tonight, the Magda Brudzińska Klezmer Trio had the stage. The whole evening was perfect in every way, and is highly recommended! Beautiful as the city now is, it has survived hard and tragic times. The Second World War has held rampage here. After the Nazi’s invaded Poland in 1939, the country was divided into three zones resulting in Krakow becoming the capital of the General Government. To the Nazi’s this meant that Kraków was to be the “racially cleanest” city in this zone. Streets and squares were renamed in German, Poles were removed from the centre, and the Jewish population was replaced in a ghetto in Podgórze, on the southside of the river Vistula. Over the course of the war, the ghetto was made smaller and smaller, until all Jews were sent to the two concentration camps closeby: Plaszów and Auschwitz-Birkenau.

When in Kraków, there are several places that can be visited to learn more about the Second World War and what happened to Poland, and mainly the inhabitants of Kraków.

To me, my visit to Kraków was combined with an overload of emotions. One moment you’re thoroughly enjoying yourself having a drink on the sunny terrace with so much joy and happiness around you. The next, you’re visiting a concentration camp overwhelmed with emotions, trying to comprehend how people can be so unbelievably cruel.

It was genuinely one of the most impressive and beautiful cities I’ve ever been to.