After our trip to Albania (which you can read about in part III), my siblings and I only had two days left in the beautiful country of Greece.

The second to last day were spent by the house. Swimming in the pool, finishing our books, relaxing on the balconies. Staying outside till late at night, just talking about anything and everything. Or playing a game called 30 Seconds, which is awesome and made us all very competitive. Basically enjoying the finer things in life.

The last day held one more sightseeing excursion for us; The Achilleion. This is a palace that has been built by the order of Empress Sissi of Austria in 1890. The palace is built on the slopes of the mountain, and includes a garden with phenomenal views over Corfu. It also houses several statues and paintings of the Greek hero Achilles, hence the name and theme of the palace. 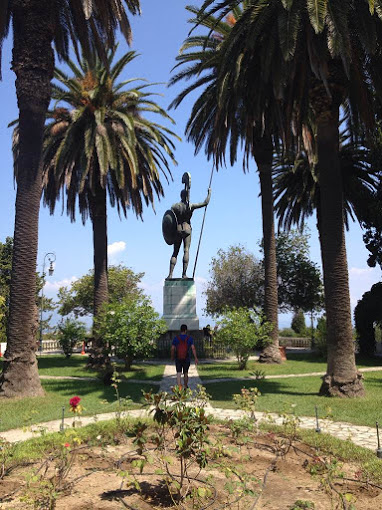 If you plan on visiting, keep in mind that there is limited car parking space available, so if you could go any different way, I’d strongly recommend that. Also, I’ve seen the weirdest tourist ever inside the palace. They literally saw the place as some kind of fashion shoot, taking pictures kissing the century old statues, mirrors and what not. Odd.

Fun fact: James Bond-lovers, I call on you. The casino scene in the film For Your Eyes Only has been filmed in the Achilleion!

To close our holidays off in style, we visited the touristic beach town called Benitses once again. This was where we also went to the beach, and took a swim in the Ionian Sea, which was quite refreshing. Yet again however, I am a cry baby when it comes to water, especially when there’s plants on the bottom of the sea that stroke my leg everytime I try to swim. I did swim though, so go me! Mainly because I absolutely adore the salty beach hair I get afterwards…

Anyways, food! Our last meal! Sort of. Greek Salads and Grilled Fishes and Squids were ordered once again, because why change a good choice? However, my sister decided to change something which I think you can get in any Greek restaurant all over the world: Mixed Grill. I believe that this version included Chicken Souvlaki, Bifteki, Lamb cutlets, and Loukaniko, which is a special Greek sausage. As the name suggests, all meats were grilled, and served simply with onion, cucumber, tomato, and lemon. 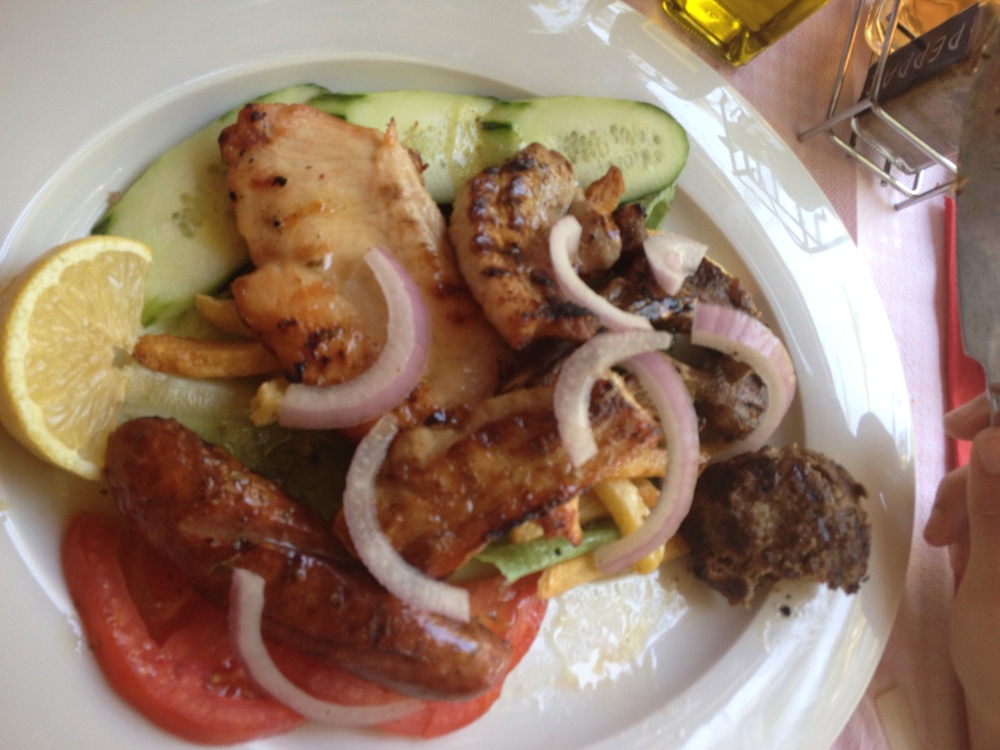 I decided to also go for a globally known Greek dish, but one that I have actually never tasted in Greece: Pita Gyros. I can safely say that this is the best one that I have ever had in my entire life. The pita was soft and chewy, and the meat. Oh my gosh, the meat. So succulent. It melted in my mouth. Combined with tzatziki, this was so incredibly good. Yum.

Also, I am not sure if this is a Corfu thing, but I have not seen it anywhere else in Greece yet, but in every restaurant I’ve been they serve complimentary bread. The bread has been infused with olive oil and parsley, and grilled. It’s so tasty, and very easy to make back home! 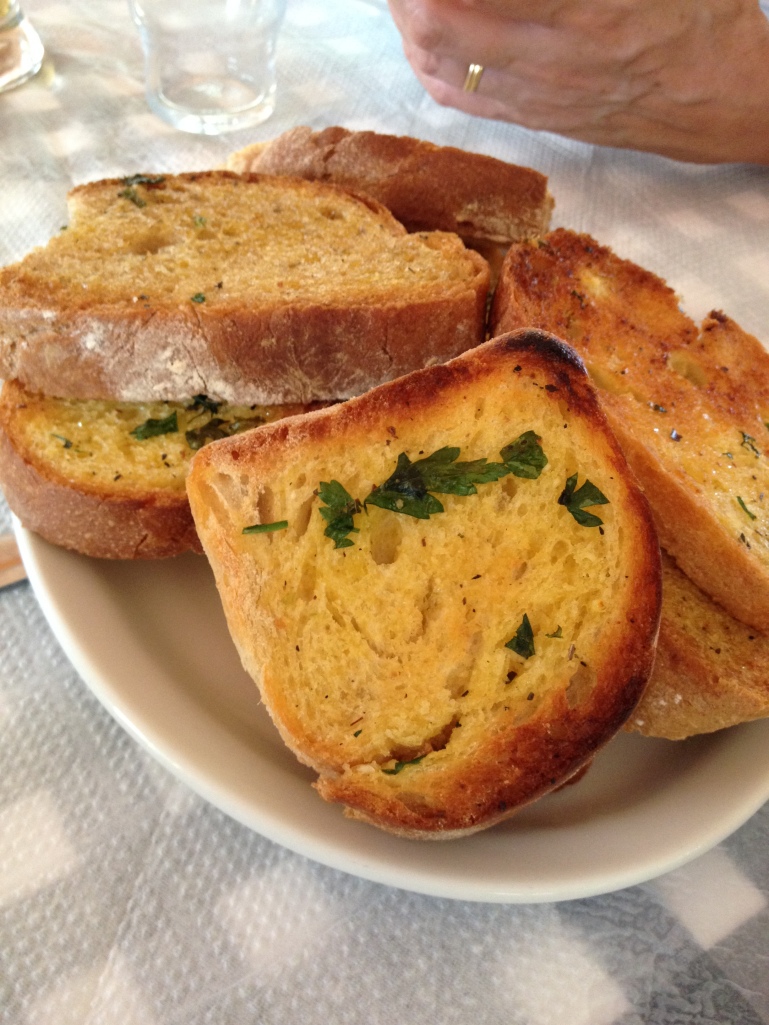 So yeah, that’s it for the food element of the trip. But there is something that I need to discuss with you guys. Something that has been on my mind ever since I started writing The Corfu Diaries. Something which I’ve been hinting about in all these posts. Something that is so good that I’ve called (and still do) it the Nectar of the Gods.

It’s time to talk about the deliciousness that is Retsina.

Oh, how I wish I was drinking this right now. Sure, it will never taste the same as it does in Greece. But still. 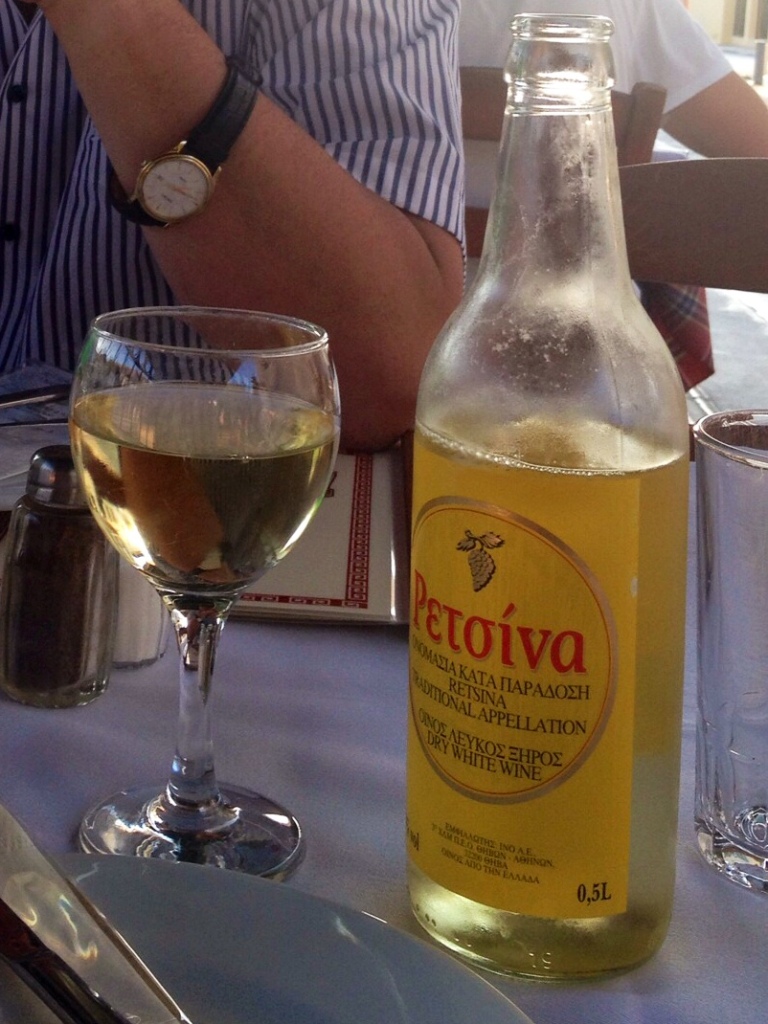 Let me point out why Retsina is so amazing:

No, I’m just kidding. Although, these points do help, it’s actually the original and surprising flavour of the wine that makes it so unique and exqquisite. This flavour comes from the pine resin that is being added to the must during the fermentation of the grapes. Wow, that was one heck of a professional sentence. I’ll break it down.

In ancient times, wine went bad quicker than in the present. To prevent this from happening, the clever Greeks decided to seal the amphorae with pine resin. Meaning that air did not get to the wine, which gave the wines a longer lifecycle (humans not so much, I reckon). Along with the sealing, the pine resin also influenced the flavour of the liquid.

Even though the Romans introduced wine barrels, people were smart enough to keep using the pine resin to flavour the must.

I mean, the fact alone that Retsina has been around for more than 2000 years kind of already tells you that it is something quite magnificent. Additionally, you can buy bottles of 2 liters in the supermarket in Greece, so yeah.

Try it if you’re ever anywhere in Greece, or when you find it somewhere in your own country, and let me know what you think! I may have raised your expectations too much, but it’s literally my favourite wine.

There you have it, guys. An elaborate journal of my holidays in Corfu. I hope I made you excited or at least curious about this wonderful place.

Visit the island, there will be no regrets.